The European Commission has invested €1.5 million in Gothenburg-based wood technology company Modvion. The investment is done through the EIC Fund and is one part of the EIC Accelerator support of €6.5 million in funding Modvion was granted in 2020 to build its first commercial wind turbine tower in wood. 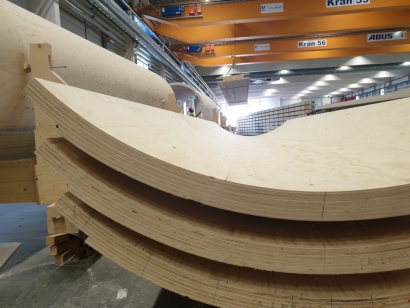 “It is a seal of quality that the EU chooses to continue supporting us, and now taking the step to become a shareholder. To combat the climate crises, we need more renewable energy and sustainable wooden constructions, our technology enables both,” says Otto Lundman, CEO of Modvion AB.

The EIC Fund is an initiative by the European Commission to support breakthrough innovation companies. In 2020, Modvion was granted a total of €6.5 million in funding through the very competitive EIC Accelerator program. The funding consists of €2.4 million in grants and the remaining €4.1 million in equity.

“We are glad to announce the EIC Fund is contributing to Modvion’s bringing to market the next generation of wind turbine towers. Replacing concrete and steel, from which traditional wind towers are built, with laminated wood dramatically reduces the carbon dioxide footprint of the wind energy industry,” added Martin Bruncko, member of the EIC Fund Investment Committee.

Modvion builds wooden wind turbine towers in laminated wood, nature’s own carbon fiber, which is stronger than steel at the same weight. The towers are built in modules that can be transported on public roads, making it easier to build taller towers at a lower cost. The carbon dioxide taken up by trees as they grow is stored in the wooden towers, which enables climate neutral wind power by replacing large emissions from steel or concrete towers.

Amongst other things, the EU funding will be used to build Modvion’s first factory. In April 2020, Modvion’s first wooden tower was erected on the island of Björkö outside Gothenburg. The 30metre tower was ordered by the Swedish Wind Power Technology Centre at Chalmers University of Technology.

“We enable the wind power industry to build climate-neutral wind energy, lower total costs and facilitate transportation of tall towers. It feels great that the European Innovation Council understands the potential in our technology and invests in fighting climate change,” says Otto Lundman.

In 2021, Danish Vestas, the world’s leading wind turbine manufacturer, became a shareholder in Modvion. Additionally, Modvion has an ongoing collaboration with global energy company Enel Green Power and has signed letters of intent for wind turbine towers with international power company Vattenfall, as well as with Rabbalshede Kraft and Varberg Energi.